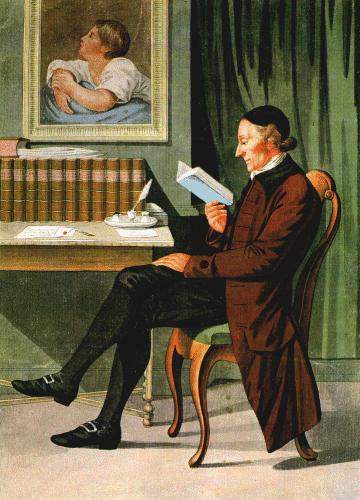 Johann Caspar Lavater (1741-1801), author and from 1769 pastor in Zurich, was one of the most dazzling figures of his time. His charismatic personality and his works mostly committed to the enlightenment turned Zürich in the second half of the 18th century into a spiritual centre.

In the research project Johann Caspar Lavater – Historical-Critical Edition of Selected Correspondences (JCLB) the more than 20.000 letters from and to Lavater are currently documented and digitalized. A selection will be edited online and will serve as the basis for further research.

In cooperation with the Zentralbibliothek Zürich, the TCDH of the University of Trier (Trier Center for Digital Humanities), the IT Department of the University of Zurich and NIE-INE, the project will open up new perspectives on Lavater research and the study of the intellectual cultures of the 18th century. The rich and diverse epistolary material will thus be provided for current and future research interests. Lavater's beliefs in the fields of philosophy, theology, physiognomics and paedagogics can thus be the basis for current interdisciplinary research.

The Selected Works in Historical-Critical Edition (JCLW) in ten volumes (JCLW) publish a representative selection of theological, philosophical and educational, political, and physiognomical writings of Lavater on behalf of the Research Foundation and the editorial circle of Johann Caspar Lavater. Supplementary and study books (JCLSt) and an electronic version (PDF Edition) complete the work output.